Welcome! Be sure to visit the NABC website as well.

Back to Daily Updates

After shooting water action with no card in the camera last evening, I was rewarded with even bigger action today when I was ready.

Reminding me of the Three Amigos of years back (Mickey, Dale, and Cal) as were shown in the Bearwalker documentary, 3 yearlings are again hanging out to travel and play together. We haven’t seen the current three well enough to know who they are yet. Today, we saw them playing on land: play-biting, hugging, wrestling, and taking each other down. After a half hour or so, they moved the spectacle to a pond for more of the same with a lot of splashing. They even played a bit as they paused for a bite to eat. Then they swam across the lake, frequently played as they swam—especially so when they reached the shallow water of the far shore. 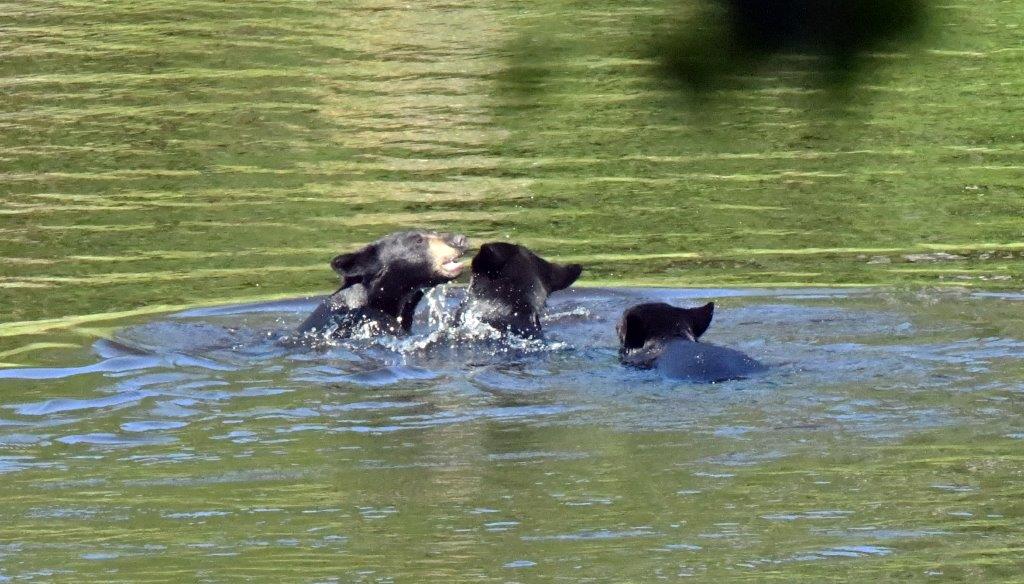 Young bears, and sometimes older bears, like to have fun. Seeing the bears playing today reminded me of the days when Lucky, as a cub, decided to accept Ted’s play advances. Even though Ted was more than 10 times his size, Lucky dared to lie on his back under Ted and trade gentle play-bites, etc. When Lucky got bigger, Ted let Lucky take him down and stand over him with Ted playing happily on his back. Eventually, playing together ended. As Lucky matured, he began treating his old play-buddy like a rival and shifted his play to Holly.

I was delighted today to get this 1 minute 46 second video of Spencer and Moe recognizing my wife Donna for all she did to develop the beautiful flower garden at the Bear Center during 2007-2017. I remember the house being filled with flower pots and lights as she grew plants from seeds in winter and spring and then worked planting these select plants to give color and to support pollinators. The garden and its perennial plants continue today with others weeding it, etc. https://www.youtube.com/watch?v=ZxZttdpeAbg

A young yellow-bellied sapsucker banged into a window today. We ran out to see if it was okay. It appeared that it would be okay, so we put it on the side of a white pine that is easy to cling to. It rested for a half hour or so, perked up, and flew away for a happy ending. 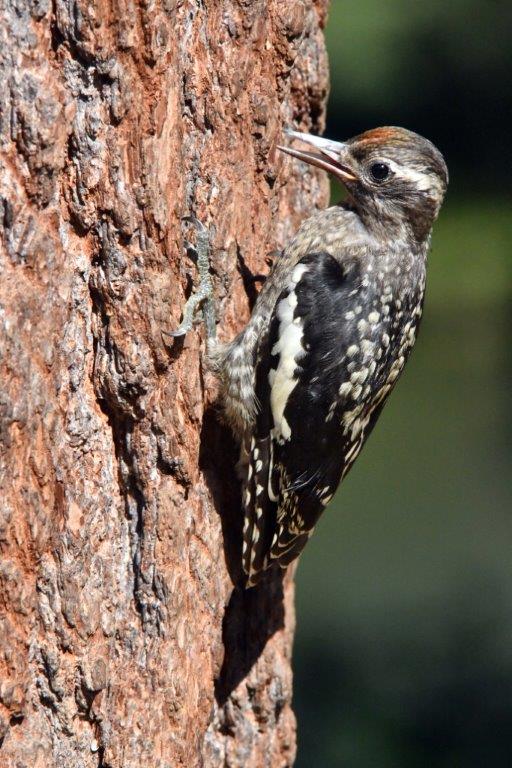 Yellow bellied sapsuckerOn another happy note, a neighbor went to Ely and picked a bucket of ripe chokecherries that explain why so many bears have been coming into Ely in this time of marginal food in the woods. Braveheart showed her immediate preference for the chokecherries. So did VDot when he appeared. Good bears and good neighbors.

Thank you for all you do.
Lynn Rogers, Biologist, Wildlife Research Institute and North American Bear Center

Donate to the WRI
Latest Donors

Email Address
This email address is being protected from spambots. You need JavaScript enabled to view it.